Please note that the 2017 National Poomsae Team Selection Procedures have been posted. This year’s team will be selected at the 2017 USA Taekwondo National Championships. Be sure to read through the procedures and understand the process!

May 13 wrapped up in Texas and North Carolina as 2 of our national poomsae team coaches conducted fundraiser seminars for 40+ participants. We hope those attended had a great time learning, and we would like to thank Coaches Chuang & Brand as well as all the national team members Elva Adams, Carissa Fu and Adalis “AJ” Munoz who came out to help out with the events.

Also, we would like to thank Masters Song, Tippens, and Partridge for hosting these events! 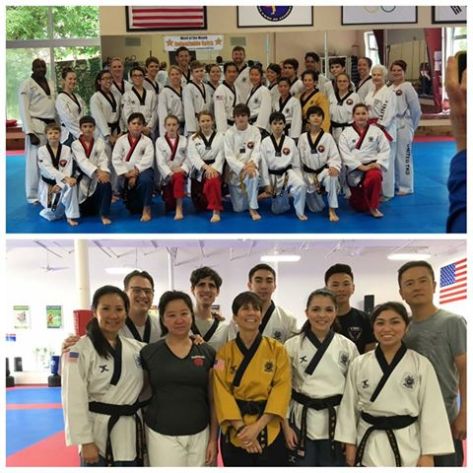 The poomsae reference video page of US National Team Members performing the recognized poomsae has been updated to include performances from the 2016 World Poomsae Championships. Please feel free to share with your students and athletes!

The poomsae reference video page can be found by clicking here.

Congratulations again to Alex Twu, Monina Dizon and Coach Huy Nguyen for representing the US National Poomsae Team at the United Nations’ International Day of Sport for Development and Peace on March 28, 2017. For the full article at the USA Taekwondo site, please click here.

Congratulations to the following athletes who earned a berth on the 2017 National Collegiate Taekwondo Team at the NCTA Championships on April 1-2, 2017 at the University of California, San Diego. Athletes had to perform both recognized and freestyle routines to make the team. The team will compete at the 2017 World University Games in Taipei, Chinese Taipei in August 2017.

Congratulations to all! For full results, including the collegiate and high school championships divisions, please click here.

Our first USA fundraiser seminar for 2017 kicked off in New Jersey. We would like to express great gratitude to Mr. Franco and Ms. Thomas from Stomp Ground Taekwondo and Team Pride! The event attracted ~30 athletes. Also, thank you Coach David J. Turgeon for volunteering your time to work with the athletes.

For more information on our next fundraiser seminars, please visit
www.usat.hangastar.com

Our momentum for the USA National Poomsae Team fundraiser seminar continued on in Carson City, Nevada on April 16! We would like to express great appreciation to Grandmaster Chi Duong for hosting this event and helping with the training. Also, thank you Coach Huy Nguyen for volunteering your time to work with the atheletes and instructors attending the seminar.

For more information on our next fundraising seminars, please visit www.usat.hangastar.com.

The US National Poomsae Team Staff is  pleased to National Team Poomsae Seminars have been announced for the following dates and locations:

You may now register at the USA Taekwondo web page through the Hangastar site.  As always, check the events page for the latest updates.

Don't forget to check out USAT.Hangastar for registration.

If you have a poomsae-specific event that you would like to add to this list, please email info@poomsae-usa.com.

Welcome to the US National Taekwondo Poomsae Team Page! This page is a resource for poomsae practitioners in the United States .

For more information or questions about this Taekwondo poomsae site, contact info@poomsae-usa.com.

For the USA Taekwondo website, please go to http://www.teamusa.org/USA-Taekwondo.